Norwegian immigration to this country began in 1825, when the first contingent of fifty three came from Norway. From 1839 to 1850 many more came. Coming mostly from the country districts of their homeland, these immigrants naturally turned their attention to agriculture. Their coming at this time was most opportune, as the very heart of the agricultural section of the United States was open for settlement. In the early fifties they began to go west making their way into Iowa and Minnesota.

In June 1854, the first Norwegian settlement was made in that part of Fillmore County called Greenfield Prairie. The first of these settlers were Johannes E. Sauarlie (Ellies) and Johannes Thoe with their families. A few weeks later two more families arrived namely: Erik Solseth and Herbjorn N Ingulfsland (Nelson). Other settlers came, not only from old settlements, but directly from Norway. While these settlers were busy building homes, breaking virgin soil, and building shelters for their livestock, they made a priority to nurturer the spiritual side of their lives. They had in home daily devotions and children’s Catechism and Bible readings.

1856 marks the beginning of Greenfields ministry as pioneer ministers from Norway cared for spiritual needs. The first recorded meeting was held on December 10th, 1864. On July 30, 1865 Greenfields first regularly called pastor, Rev. Tobias Larson was installed and on July 2, 1866 a constitution was adopted on January 2, 1866. A “Letter of Call” sent to a pastor stated at that time stated the compensation a minister would received, “We will provide $3000 per year salary, free will offering for performing ministerial acts, a house with at least 20 acres of tilled and fenced land, one bushel of wheat, one bushel of oats or their equivalent in money and wood or its equivalent.”

The first church was 48 feet long, 36 feet wide and 18 feet high, with a 75 foot steeple. The church was built with brick made locally in a kiln owned by Arne Aaberg. One acre of land was donated by Knut Peterson. The building was soon enclosed and dedicated on October 7, 1874. The church fulfilled its mission for forty six years. Lightening struck it once, splintering the steeple. The building was taken down in 1919 having been declared unsafe. All services were performed in Norwegian until 1887 when it was decided to preach in Norwegian and English.

In 1866 four congregations built a parsonage which served as such until 1897. The farm was later sold and the brick home is still in very good condition and is located just east of Harmony. With the four congregations growing, Greenfield built their own parsonage in 1905. Three lots were purchased and a large two story house was built. This parsonage has served all pastors to date and is located 1 block east of the present church.

A corporation had been formed in Harmony by the members of the Greenfield congregation and others. Called the Lutheran Auxiliary Church Society Association. They proceeded to build a chapel which was to be used for Sunday school, Paraoical School, and public services, and social gatherings. As time went by Greenfield parish saw a need for a church in Harmony. On April 10, 1912 arrangements were made to purchase the chapel and grounds for the sum of $1.00 the building was resold and moved to 450 1st Ave SW where it has been used for a residence for many years. The present church was built on the ground.

The building committee for the new church of five members namely: Toffef Sanderson Sr, John A Lund, Ole O Fosse, Tosten Applen and Ole Scrabeck. The cornerstone was laid September 29, 1912, because of extremely cold weather and difficulty in getting materials the dedication of the new church was delayed until Sunday September 21, 1913. The sermon was given by Rev. T H Dahl President of United Lutheran Church of America. Ground broke in May 1961 and the cornerstone was laid for the new education wing, offices, chapel and library for the cost of $125,000.

Members have paid close attention to the care and historical preservation of the church. The sanctuary features beautiful woodwork and detailed good leaf, stained glass windows and architecture. The church as been updated with to handicapped accessible entrance and elevator. The front of the church is lit up in the evenings.

Read the 'Memories on the Occasion of the Dedication of the New Church Building in Harmony, Minnesota – 21 July, 1913'. Available in English and the original Norwegian copy. 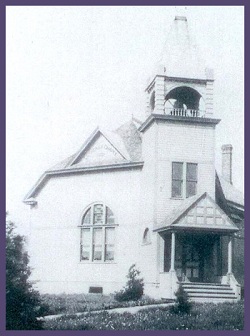 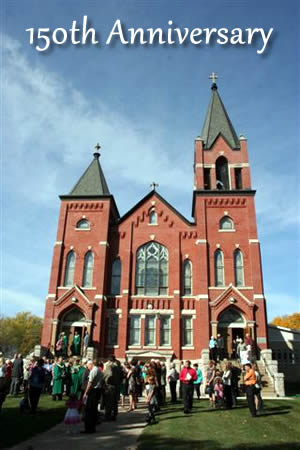 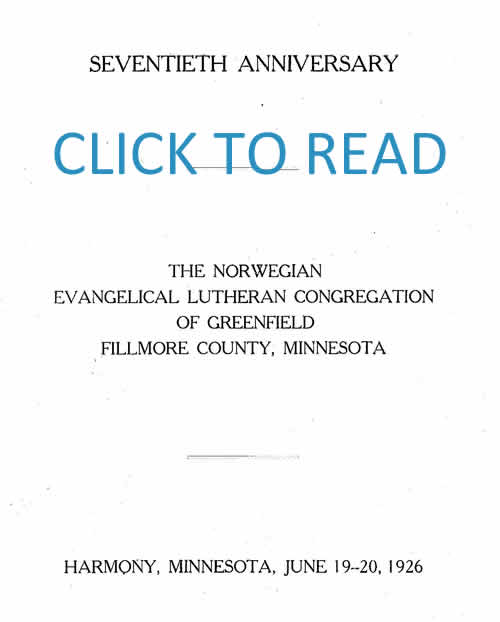 Our God given mission is to celebrate with joy, our life in Christ. Sharing that joy with others.